In Keycloak 3.3.0.CR1 we added basic setup for cross-datacenter (cross-site) replication. This blogpost covers some details about it. It consists of 2 parts:

If you're not interested in too much details, but rather want to try things, feel free to go directly to the example. Or viceversa :-)

Here is the picture with the basic example architecture 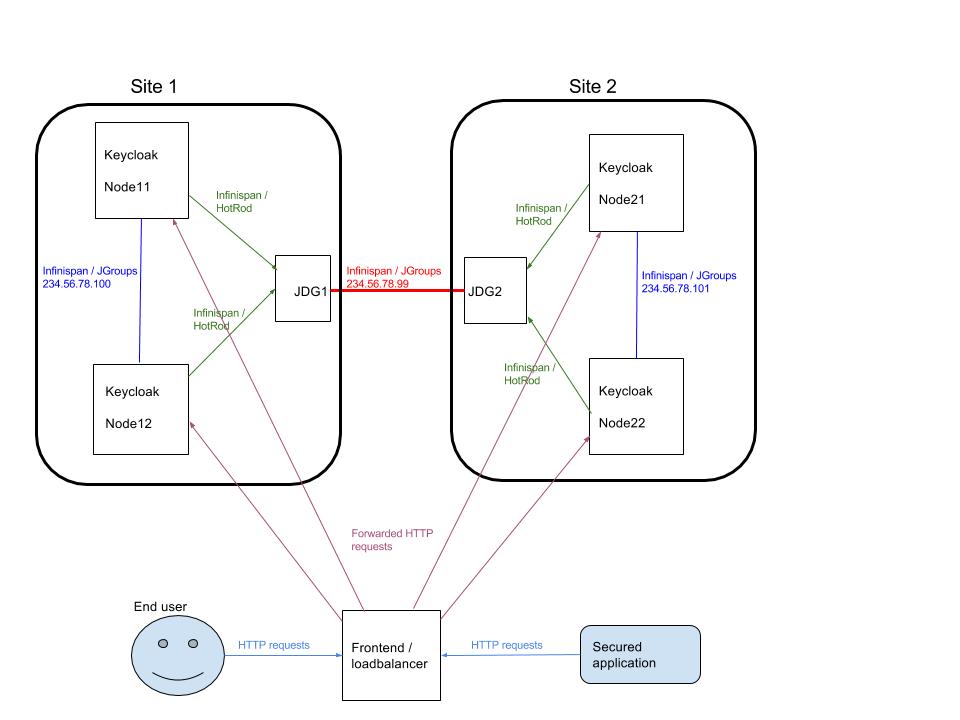 In 3.2.0 we introduced also action tokens, which are used typically for scenarios when user needs to confirm some actions asynchronously by email. For example during forget password flow. The actionTokens infinispan cache is used to track metadata about action tokens (eg. which action token was already used, so it can't be reused second time) and it usually needs to be replicated between datacenters.

Keycloak uses RDBMS to persist some metadata about realms, clients, users etc. In cross-datacenter setup, we assume that either both datacenters talk to same database or every datacenter has it's own database, but both databases are synchronously replicated. In other words, when Keycloak server in site 1 persists any data and transaction is commited, those data are immediatelly visible by subsequent DB transactions on site 2.

Details of DB setup are out-of-scope of Keycloak, however note that many RDBMS vendors like PostgreSQL or MariaDB offers replicated databases and synchronous replication. Databases are not shown in the example picture above just to make it a bit simpler.

Caching and invalidation of persistent data

Keycloak uses infinispan for cache persistent data to avoid many unecessary requests to the database. Caching is great for save performance, however there is one additional challenge, that when some Keycloak server updates any data, all other Keycloak servers in all datacenters need to be aware of it, so they invalidate particular data from their caches. Keycloak uses local infinispan caches called realms, users and authorization to cache persistent data.

There are infinispan caches sessions and offlineSessions, which usually need to be replicated between datacenters. Those caches are used to save data about user sessions, which are valid for the whole life of one user's browser session. The caches need to deal with the HTTP requests from the end user and from the application. As described above, sticky session can't be reliably used, but we still want to ensure that subsequent HTTP requests can see the latest data. Hence the data are replicated.

Finally loginFailures cache is used to track data about failed logins (eg. how many times user john filled the bad password on username/password screen etc). It is up to the admin if he wants this cache to be replicated between datacenters. To have accurate count of login failures, the replication is needed. On the other hand, avoid replicating this data can save some performance. So if performance is more important then accurate counts of login failures, the replication can be avoided.

The infinispan caches on Keycloak side needs to be configured with the remoteStore, to ensure that data are saved to the remote cache, which uses HotRod protocol under the covers. There is separate infinispan cluster between JDG servers, so the data saved on JDG1 on site 1 are replicated to JDG2 on site 2.

This is the example setup simulating 2 datacenters site 1 and site 2 . Each datacenter (site) consists of 1 infinispan server and 2 Keycloak servers. So 2 infinispan servers and 4 Keycloak servers are totally in the testing setup. Example setup assumes all 6 servers are bootstrapped on localhost, but each on different ports. It also assumes that all 4 Keycloak servers talk to same database, which can be either locally set MySQL, PostgreSQL, MariaDB or any other. In production, there will be rather separate synchronously replicated databases between datacenters.

5) Start server jdg2: 6) There should be message in the log that nodes are in cluster with each other:

1) Download Keycloak 3.3.0.CR1 and unzip to some location referred later as NODE11

3.2) Add output-socket-binding for remote-cache into socket-binding-group element: 3.3) Add this module attribute into cache-container element of name keycloak : 3.4) Add the remote-store into work cache: 3.5) Add the store like this into sessions cache: 3.6) Same for offlineSessions and loginFailures caches:

3.7) The configuration of distributed cache authenticationSessions and other caches is left unchanged.

The cluster nodes should be connected. This should be in the log of both NODE11 and NODE12:

It shouldn't be connected to the cluster with NODE11 and NODE12, but to separate one:

It should be in cluster with NODE21 :

9.4) After doing any change (eg. update some user), the update should be immediatelly visible on any of 4 nodes as caches should be properly invalidated everywhere.

9.5) Check server.logs if needed. After login or logout, the message like this should be on all the nodes NODEXY/standalone/log/server.log :

This is just a starting point and the instructions are subject to change. We plan various improvements especially around performance. If you have any feedback regarding cross-dc scenario, please let us know on keycloak-user mailing list referred from Keycloak home page .