With Keycloak 3.3.0, the support for large-scale deployment across multiple data centers (also called cross site, X-site, cross data-center, cross-DC) has become available. The natural question arose about how this support can be utilized in cloud environment. This blog post follows up on previous blog post on setting up cross-DC locally, and enhances it with an example of how to setup this type of deployment in Amazon Web Services (AWS).
It is strongly recommended to use version 3.4.3.Final at minimum as there were several important fixes done around cross-DC support since the first cross-DC-capable version.

The general architecture of a cross-DC deployment is described in detail in Keycloak documentation and briefly shown in the following diagram. There are several data centers (site1 and site2 in the picture that can be found in full scale in the documentation). The sites have a replicated database, set up ideally in multimaster synchronous replication mode. Each site has a cluster of Keycloak nodes and a cluster of Infinispan nodes. The clusters of Keycloak nodes are hidden behind a load balancer in private subnet; Infinispan nodes form a cluster within corresponding data center, and in addition utilize RELAY protocol to backup each other across data centers.

This post is based on three CloudFormation templates that gradually build two data centers with Keycloak instances, each data center in a separate AWS availability zone sharing the same virtual private cloud (VPC). Note that the templates are intended for trying/testing purposes only, not for production. The templates are described below:
Once you launch the last stack, Keycloak will be available at the load balancer address that will be shown in Outputs tab of the third stack under LoadBalancerUrl key.

Accessing Keycloak nodes is only a bit more complicated since these are spawned in private subnets and can only be accessed via Infinispan nodes. You can either copy the private key to the intermediate Infinispan node and use it from there, or (easier) use SSH agent forwarding as follows:

As you would find out from the cross-DC guide, many of the DC-wide operations require running JConsole and invoking operations on Infinispan JMX MBeans. For example, to take a DC offline, one has to first disable backups from the other DCs into the DC about to be shut down, and that is performed by invoking takeSiteOffline operation on CacheManager's GlobalXSiteAdminOperations MBean.

To connect, it is easiest to have a tunnel created to the Infinispan node via SSH command. To simplify the situation a bit, the ssh command for connecting to Infinispan server and creating the tunnel is shown in the Outputs tab of the third stack under SshToInfinispanDcX key, and it takes the following form:

In the command above, the host key checking is effectively disabled as this is only a test run, do not do this in production!
Now it is necessary to add an Infinispan management user so that it is possible to fill in JConsole credentials:

The last thing is to run actual JConsole. Since JConsole does not have support for the service:jmx:remote+http protocol used by both Infinispan and Keycloak, it is necessary to modify JConsole classpath. Fortunately, this work has been already done in WildFly so we can use a script already prepared there. On your local host, extract either WildFly 10+ or Infinispan to path WF_ROOT, and run the following command:

In the New Connection window, specify Remote Process properties as follows (note that we're using port 19990 on localhost forwarded securely by ssh to actual management port above, this requires the ssh command above to be running for the whole time JConsole is used): 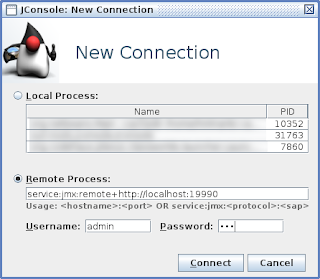 Now you can connect to the running instance, navigate to any bean you need and perform operations as needed. The backup site names are configured by the AMI stack to values dc-1 and dc-2. 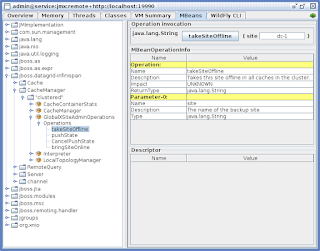 This blog has been written at the time Keycloak 3.4.3.Final has been released. There may be incompatible changes in the future but you should still be able to run the templates with this version.